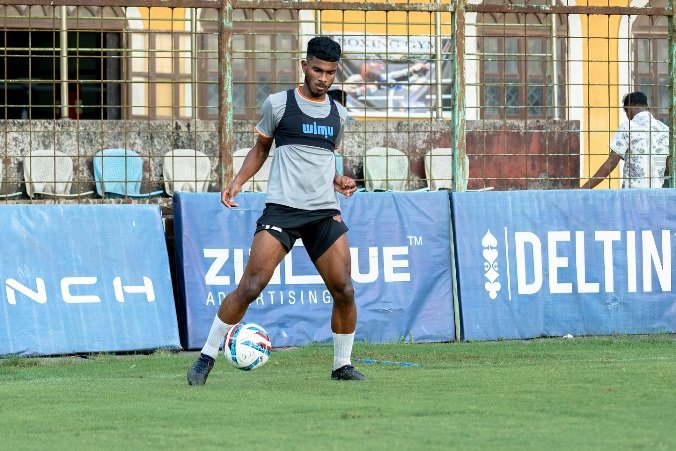 Mumbai, November 4, 2022: On Thursday, a night of several storylines at the Pandit Jawaharlal Nehru Stadium in Fatorda culminated with a remarkable 3-0 win for FC Goa against Jamshedpur FC. The Gaurs marked the occasion of returning to their home turf with goals by Iker Guarrotxena, Noah Sadaoui and Brison Fernandes.

Among them, it was Brison’s strike that stood out for the Goa faithful. The youngster latched on to a low ball from Saviour Gama and flicked it over an onrushing defender to bring it down to his other foot before smashing it past the goalkeeper on the half-volley before wheeling away in celebration.

This was the 21-year-old’s maiden ISL goal and it came in only his fifth match ever in the league. Speaking to fcgoa.in after the game, he said, “I felt incredible (after scoring).

“For the next five minutes, I felt like I was in a dream. It felt unreal. I have been working for this for so many years, and for it to finally come true was an amazing feeling. It wouldn’t have been possible had it not been for the help and support of many people. I thank God, my family, friends, all my coaches, and everyone who has supported me at FC Goa.”

Soon after the final whistle, he met his parents who were at the stands to witness their son’s memorable outing against the Men of Steel. “They were also very happy to see me score and help in the team’s win. My parents have supported me a lot throughout my journey so far, and I owe a great deal to them for all my achievements.

“As soon as we met after the game, they celebrated our team’s win with me. They also reminded me that my feet should be planted firmly on the ground and that I still have a long way to go – an advice that I follow with earnestly,” Brison went on.

‘The first person I called was Coach Derrick’

The nimble-footed midfielder also revealed that his phone has been flooding with messages and calls conveying congratulations and good wishes since Thursday night. “I’ve got a thousand calls and messages, and I’m slowly taking the time to respond to everyone. I’m floored by the support,” he said.

One person that the 21-year-old did not miss out on was Derrick Pereira, FC Goa’s Technical Director. Pereira has played a big role in his development, overseeing his progress right from his time with the Club’s youth sides and later with their Development and First teams.

It was also under Derrick Pereira that Brison Fernandes made his ISL debut, in the 2021-22 season when the former was their head coach. “The first person that I called was Coach Derrick. He congratulated me on the goal and told me to continue working hard and chasing my dreams,” he said.

A testament to FC Goa’s scouting and development system

Brison Fernandes’ goal against Jamshedpur FC is another win in itself for FC Goa – a success story for the Club’s scouting and player development practices.

The 21-year-old was scouted by the Gaurs while he was playing in a local village tournament nearly six years ago. Soon afterward, FC Goa offered him a contract to join their youth set-up. Earmarked for success ever since, the youngster trained under the watchful eyes of the Club’s coaches and showed steady progress. Over time, he joined the Development team before earning his promotion to the First team last season.

FC Goa have been diligent in developing talent from within the state, and have several examples to show for it already with Brison being the latest example.

The young midfielder now follows in the footsteps of the likes of Saviour Gama, Liston Colaco, Princeton Rebello, Mohammad Nawaz, Vincy Barretto and so on, and is only the second player after Gama to score a goal for the Gaurs’ First team in the ISL after rising through the ranks from the Reserves side.