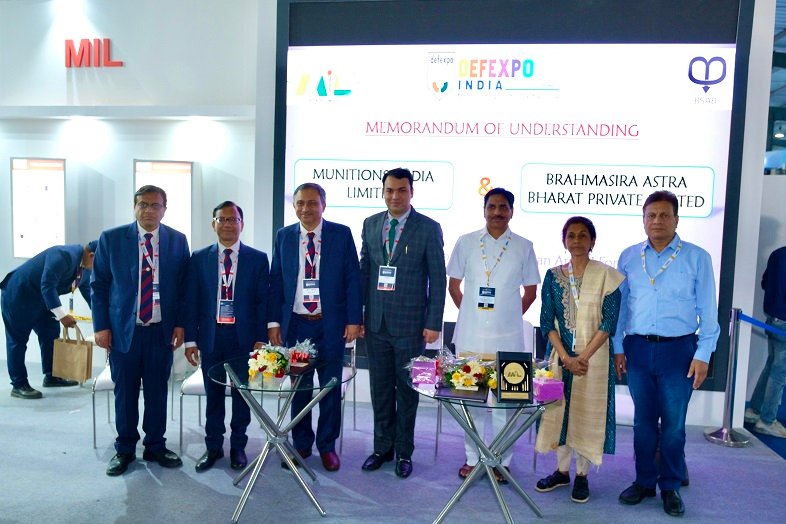 India’s leading Defence PSU Munitions India Limited and Brahmashira Astra Bharat Private Limited (BSA Bharat in short) have joined hands and signed a Memorandum of Understanding (MoU) for R&D cooperation, development, manufacturing, and incubation of start-ups in defense and aerospace sectors. The MoU was signed on 18th October at the 12th Edition of DefExpo 2022, the flagship Defence exhibition of India, held at Gandhinagar, Gujarat from 18- 22 October 2022.

Both parties agree to cooperate, pursue research and development and collaborate in designing, manufacturing, and incubation of new tech start-ups to address opportunities in the Indian defense and aerospace sectors as well as exports to friendly nations.

Munitions India Limited, Chairman & Managing Director, Sh. Ravi Kant Maheshwari, IoFS, noted that “This Memorandum of Understanding (MoU) between Munitions India Limited and BSA Bharat will provide a boost to the dynamic and high-octane defense ecosystem which pivots around self-reliance and indigenization and keep pace with change and respond quickly to shifting requirements of the Armed Forces in India and overseas.”

Mr. Karan Garg, Managing Director, BSA Bharat, briefed the media that “This Agreement with Munitions India Limited to work collaboratively on research and development in the Defence and Aerospace domains will strengthen our resolve to create opportunities for growth in these sectors for the nation. We will work in synergy to develop some crucial indigenized systems, and equipment quintessential for attaining self-reliance in these sectors and to promote the export of Indian products while at the same time incubating tech platforms in India.” Mr. Garg, a Harvard alumnus, is also a former Indian Government officer.

Established as a Defence Public Sector Enterprise under the Ministry of Defence, Government of India, Munitions India Limited are India’s biggest manufacturer and market leader in the Production, Testing, Research & Development, and Marketing of a comprehensive range of ammunitions and explosives for Army, Navy, Air Force, and Paramilitary Forces. Munitions India Limited has established itself as one of the world’s largest integrated bases for the production of Small, Medium & High Calibre ammunition, Mortars, Rockets, and Hand Grenades among others with in-house manufacturing of Initiatory Compositions, Propellants, and High Explosives for over 150 years with over 12 Large Manufacturing Units across the country and a manpower of 80,000. The notable products of Munitions India Limited include Pinaka Multi Barrel Rocket Launcher, High-Speed Low Drag Bomb, FSAPDS, and Shivalik Multi-Mode Grenade.

BSA Bharat is one of the leading defense companies in the country undertaking research and development, designing, and manufacturing of combat, marine, and aerospace systems for use by the military and all kinds of forces in India and other countries. It provides one of the largest Tech platforms in India as well as gives impetus to the Start-Ups and MSMEs who have the technical know-how but require hand-holding in terms of funding and strategic advisory. Their Board comprises eminent personalities that have served and contributed to the nation’s defense institutions, research & development bodies, PSUs, financial sector majors, regulatory bodies, and legal institutions as well as played pivotal roles in augmenting the industry.