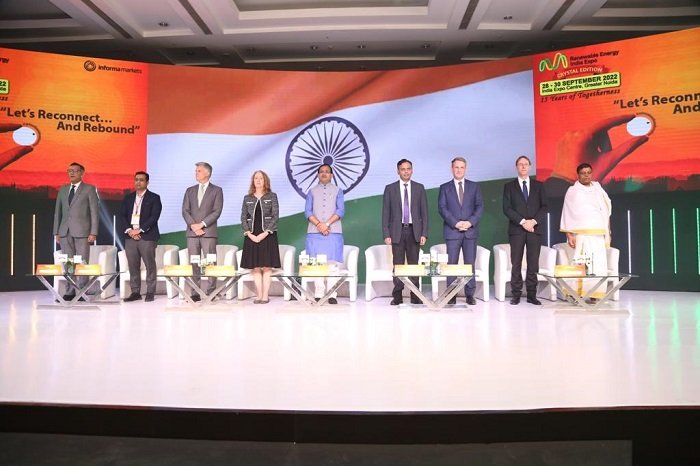 September 28, Greater Noida, Delhi-NCR: Informa Markets in India, the country’s leading exhibitions organiser, launched the Crystal edition (15th anniversary) of Asia’s biggest RE expo, the Renewable Energy India Expo 2022 today, at the India Expo Mart, Greater Noida, Delhi-NCR. It is considered to be one of the most empowering channels of dialogue and discussions about the potential of the renewable energy sector in India. Over 500 top exhibitors showcasing more than 750 brands were present on the show floor.

Sharing his views on the opening day of the event, Mr Yogesh Mudras, Managing Director, Informa Markets in India, said, “The REI expo serves as a perfect platform to celebrate the milestones India achieved in the renewable energy sector. It is an opportune forum to discuss ideas and viewpoints which will shape the future of renewable energy growth on a national and international level. Many companies and stakeholders will be promoting their latest products and innovations this year. India’s achievements speak for themselves in the Renewable Energy (RE) space. The country has emerged as the fourth largest installed renewable energy capacity in the world and registered the highest growth rate in RE capacity addition across the world. Besides, the 2070 target of Net Zero Carbon emission as committed by Prime Minister Shri Narendra Modi could boost India’s economy by 4.7 percent above projected baseline and create 20 million additional jobs by 2032. This transition needs to be affected in a strategic manner and events like REI will enable the same through deliberations, sharing of market intelligence, intellectual exchanges, ideological diplomacy, and problem-solving tactics.”

The Chief Guest of the event, Shri. Bhagwant Khuba, Union Minister of State for Chemicals and Fertilisers & New and Renewable Energy, Government of India said, “The government of India has already set its target of making India carbon emission-free in the coming years and witnessing industries take the responsibility so efficiently is definitely going to help us accomplish the aim sooner. Renewable Energy Expo has introduced new segments of energy resources and the participation of established experts will undoubtedly lead our country in a better direction. This exhibition will generate massive investment opportunities for industries, promote foreign investments and create awareness regarding the same among consumers. India is growing vigorously in the sector of renewable energy and alternative sources, solar, wind, and electrical energy. The government is also ramping up measures to increase volumes of green hydrogen generation and the support of industrialists is a boon to flourish in the segment.”

Global presence was the major highlight of the expo. It has earned great and enthusiastic participation from Delegations from Germany, USA, Canada, Belgium & other foreign countries, with Canada, Belgium & Germany.

A Bio Energy Pavilion by IBA and CLEAN – Decentralized Renewables pavilion, CEO Conclave, CTO Forum, Finance Leadership Forum, and REI Awards are some of the intellectually stirring events which will be significant attractions of the REI expo.