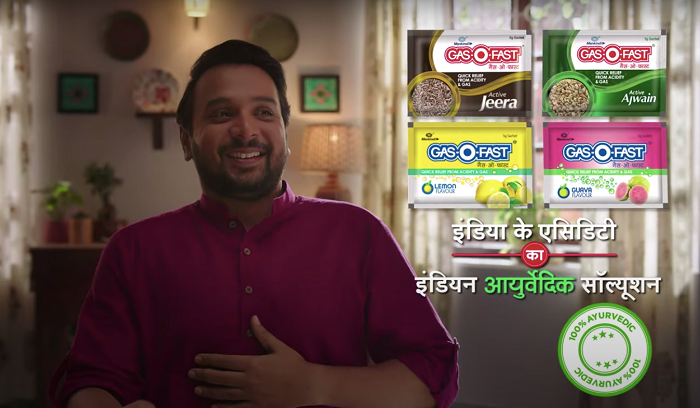 New Delhi, October 2022: Ayurvedic Gas-O-Fast, an ayurvedic antacid brand from Mankind Pharma has rolled out an extension of its #India ki Acidity ka Indian Ayurvedic Solution campaign. The brand came up with a digital campaign featuring Namit Das, (a well-known Indian film actor) to effectively communicate the message that Ayurvedic Gas-O-Fast can address the common acidity problem in India. For creating presence in the regional market, the brand also launched a multilingual TVC campaign, with Kanneganti Brahmanandam and Biswanath Basu for better brand awareness in the South and East respectively.

With an aim to reach a wider audience base, this year the brand initiated a well-planned 360-degree campaign aiming to amplify the brand reach and seek deeper penetration into the market. As part of the campaign, the brand executed multiple activities. In the first instance, Ayurvedic Gas-O-Fast activated an OOH campaign to strike a chord with the audience. The brand has launched the activity across Pune, Kashmir, Uttar Pradesh, Gujarat, Rajasthan, and other parts of India. It took a multi-dimensional route with hoardings in Pune, Boat branding in Dal Lake, Srinagar, Station branding in Gujarat and Rajasthan, and wet sampling in Uttar Pradesh to reach out to customers. The activity also included branding activity and TV serial integration on Colors TV, covering different media channels. It sought to target the non-digital audience who still resort to traditional mediums for staying updated.

Additionally, rather than restricting themselves to a few mediums, the brand has also devised various offline event sponsorships. With the objective to further propel the impact created by multilingual TVC campaigns, the brand presents Times Sharod Shrestho 2022 in association with Times of India. It was done by being a part of the Durga Pujo gaiety during the most awaited and biggest festival of West Bengal. The campaign was able to create visibility across numerous Baroari (Community based) Pujas in Kolkata.

Furthermore, in an attempt to make inroads in the rural market in West Bengal, another activity was undertaken. The brand in association with Radio Mirchi presented an event called, Mirchi Para Football. The match was an amateur football event and Ayurvedic Gas-O-Fast sought to target the audience across the districts of Midnapore, Berhampore, Barasat, and Siliguri for better brand penetration and visibility. These events were well supported with the help of digital promotions on social media handles and websites, newspaper editorial coverages, and print advertorials as well as announcements on radio channels.

On the occasion, Mr. Joy Chatterjee, Associate Vice President, Sales and Marketing, Mankind Pharma, said, “The Indian audience is very vast which portrays diverse trends. In order to reach them, the one-size fits all concept becomes obsolete and requires a more multi-fold approach to increase visibility among the audience. We sought to cater to all types of audiences with this campaign”.