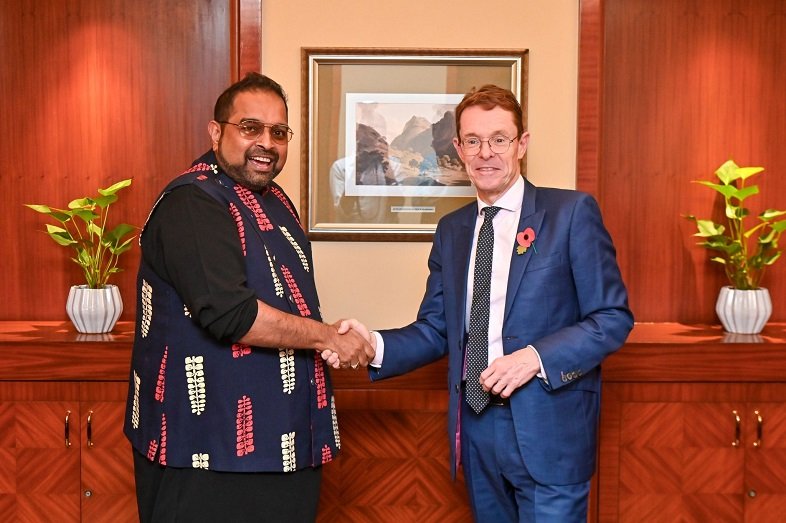 Bengaluru, 11th November 2022: The award-winning Indian singer and composer Shankar Mahadevan, described as one of the greatest Bollywood vocalists alive, is to receive an honorary doctorate from Birmingham City University (BCU) for his outstanding contribution to music and the arts.

Speaking at a trade mission event in Mumbai, West Midlands Mayor Andy Street made the announcement on behalf of the University, before the globally acclaimed playback singer and member of the celebrated Shankar-Ehsaan-Loy songwriting trio in Mumbai was formally invited to receive the University’s highest honor at a ceremony in 2023.

The Bollywood star toured RBC with fellow Indian musicians including Zakir Hussain earlier this year, meeting with students, staff, and partners, and committing to exploring links and opportunities between the Bangalore-based Shankar Mahadevan Academy and the Conservatoire.

Shankar Mahadevan said: “This is truly a special moment for me. It’s something new and takes some time for me to digest this feeling. When I started my career, never did I expect that one day I would be awarded a doctorate in music.

“I am looking forward to some amazing music being created between Indian musicians whom I represent and musicians from the West Midlands. We’ve heard musicians from the Conservatoire perform especially for us at our visit and it was just outstanding – I saw a beautiful collaboration that will happen.”

An accomplished engineer-turned-musician, Shankar Mahadevan’s melodious singing and compositions have captivated audiences in India and around the world for over three decades. His repertoire encompasses Indipop, film, folk, and spiritual music as well as Indian classical music, jazz, and world music.

The musician has performed at prestigious music festivals around the world and was invited to the United Nations Assembly, where he represented India twice. At home, Shankar had the unique honor of performing at the Rashtrapati Bhawan for former Presidents of India, the late Dr. APJ Kalam, and the late Pranab Mukherjee.

At the Mumbai trade mission event, BCU Deputy Vice-Chancellor Professor Julian Beer, via video link, formally invited the music industry figure to receive the award at a ceremony in 2023.

Professor Beer said: “I am delighted to have extended the invitation for Shankar to come over to Birmingham in the New Year to receive his Honorary Doctorate in person.

“We have had the pleasure of him visiting our Royal Birmingham Conservatoire previously, and we look forward to his return so we can build on our relationship with him and strengthen our already strong ties with India further.”

The honorary doctorate announcement underlines BCU’s commitment to their strategic partnership work in India as well, reflecting a recent call to urge policymakers to place greater emphasis on the value of the Creative Arts in higher education and recognize the role universities play in strengthening the sector’s growth and innovation.

BCU leaders have also called on industry and government to commit to increasing diversity in the arts and media industries to ensure equality and true representation, and a need to drive forwards the STEAM agenda – bringing together the Arts with STEM (science, technology, engineering, and maths) disciplines.

The West Midlands trade mission, led by Mayor Andy Street, seeks to cement existing economic ties between India’s sub-regions and the West Midlands. Senior representatives are exploring potential partnerships in areas including emerging digital technologies, low carbon mobility, and data-driven healthcare, with the common objective of creating more prosperous communities in both the UK and India.

Andy Street said: “Given the strength of the Indian diaspora in our region, it’s wonderful to celebrate the ‘living bridge’ between India and the West Midlands by honoring Shankar Mahadevan – a titan of film and music. I hope it will encourage greater cultural and educational collaboration in the months and years ahead.”

Birmingham City University will confer an honorary doctorate on Shankar Mahadevan at a ceremony in 2023, and the singer and composer will lead several collaborative projects at the University’s Royal Birmingham Conservatoire and STEAMhouse creative hubs.