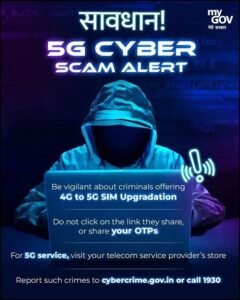 Check Point Software Technologies, a leading provider of cybersecurity solutions globally has issued suggested security measures around detected 4G to 5G SIM upgradation phishing scams in India. The company further shared that the scammers have been posing as customer care executives of respected telecom service providers, offering assistance to customers in upgrading their SIM cards from 4G to 5G. Their modus operandi was to send phishing links to coerce victims into disclosing personal and financial information. Check Point Software has proactively issued its recommendations to protect consumers from such a scam.

Such scams were first reported when state-based police departments issued warnings about these ongoing cyber threats. A tweet from the Mumbai Police informed followers of a new scam in which scammers demand money from victims in exchange for assistance in upgrading to 5G. The Twitter account for the Pune City Police, Gurugram police department, and Hyderabad Cyberabad (cybercrime unit) department has also issued similar caution. According to media reports, the authorities have urged citizens to refrain from providing their OTPs to any telemarketers because doing so could result in the complete deletion of their bank accounts.

“We have observed a spike in the spread of SMS Phishing, which uses SMS messages as the attack vector for malware distribution. Using SMS messages as an attack vector may seem rudimentary, but just like email phishing, they are extremely efficient. These attempts often imitate trusted brands or personal contacts to entice the victim to click on a link or share personal details in confidence. This method has proven particularly successful as after one device has been compromised, its entire contact list is up for grabs, creating an endless cycle of possible victims,” says Sundar Balasubramanian, Managing Director at Check Point Software, India & SAARC. “We believe this is just the beginning of such scams. With the commercial availability of 5G and consumers excited to use the advanced services, such scams are bound to increase in number, particularly in the early phases of adoption when people are still finding their way around using the 5G services. We expect to see the number, scale, and sophistication of these cyberattacks increase over time. In such instances, adopting a prevention-first approach is the best approach.”

Check Point’s Threat Intelligence reports that an organization in India is being attacked on average 1742 times per week in the last 6 months, compared to 1167 attacks per organization globally, with 4.9% of malware attacks via mobile (Global 1.8%). With India’s escalating growth in having the second most smartphone users in the world (behind China) with a 492.7million in 2021, and with the use of mobiles increasing in both the cities and rural areas, exacerbated by the WFH policy during the pandemic, mobile users need to be on their guard to expect t more of such smishing scams in the future.