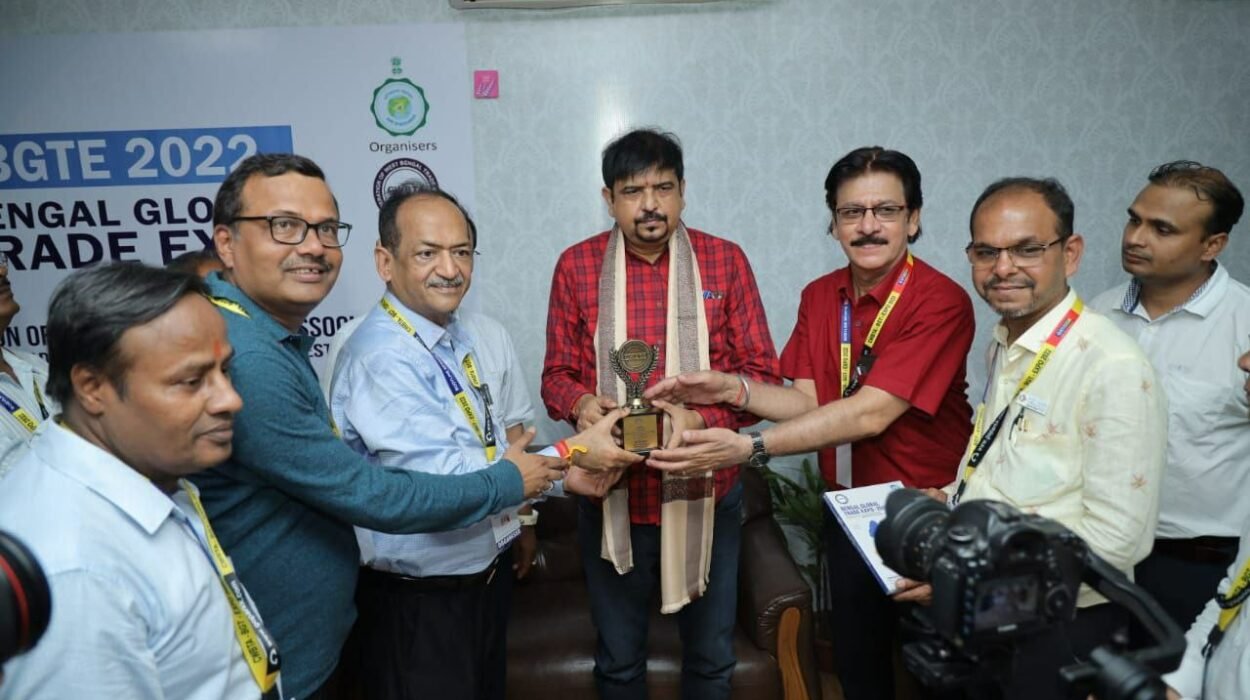 26th April 2022, Kolkata: The five-day (April 20 to 24) Bengal Global Trade Expo 2022 (BGTE 2022), organized by the apex trade body of eastern India, Confederation of West Bengal Trade Associations (CWBTA), was a resounding success generating hundreds of trade-related and business investment queries and proposals for the West Bengal Government and clocking over 2.5 lac footfalls. The BGTE 2022 was inaugurated on 20 April 2022. Over 15 countries participated in the BGTE 2022.

“CWBTA is overwhelmed by the huge response received from participants and others who visited the Expo. We have received many investment proposals and queries which we shall take up with the government. The response far exceeded our expectations. The Electric Vehicles segment generated the maximum interest and queries. We are thankful for the support extended to us by the West Bengal Government, WBIDC, trading fraternity, the chambers of commerce, MSMEs, and others leading to the stupendous success of the Expo. Another feature of the Expo was that a large number of small and medium traders and businesses from the districts of West Bengal participated in the Expo,” said Mr. Sushil Poddar, President, CWBTA. 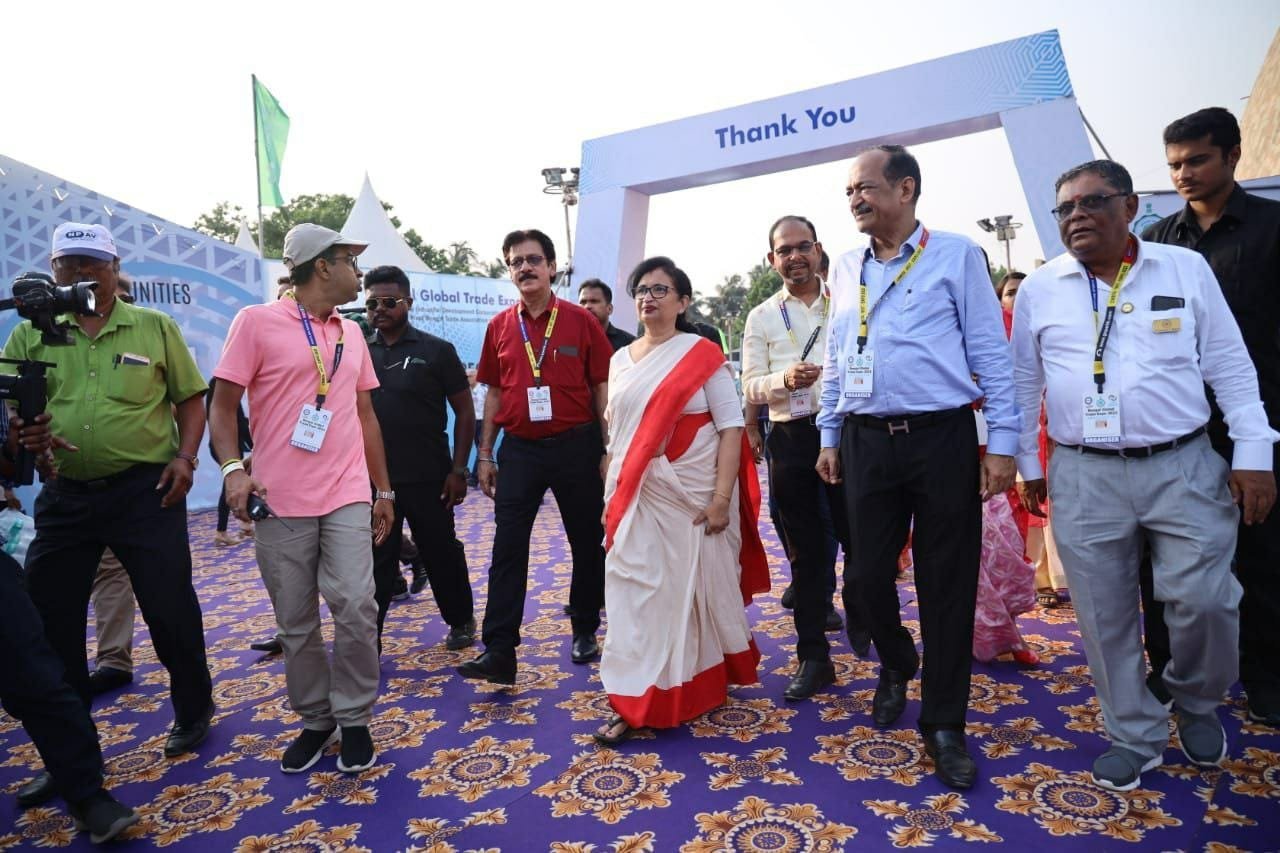 “The BGTE 2022 has been a perfect Expo to highlight West Bengal. I congratulate the earnest efforts of CWBTA to pull off a successful trade and business Expo in the city where participants from across India and the world participated and a wide variety of products and services were showcased,” said Mr. Sujit Bose, minister-of-state, Fire & Emergency Services, after visiting the Expo.

“The entire fair was very well organized and every one I found had given their sincere efforts to make it a success with nearly three lac footfalls. This makes us happy and is very encouraging. Kolkata feels proud of this Expo which is a sort of trendsetter,” said Ms. Chandrima Bhattacharya, finance minister with independent charge, minister-of-state for Health and Family Welfare and Land and Land Reforms & Refugee Relief and Rehabilitation, after taking a round of the sprawling Expo.

Mr. H K Dwivedi said that Bengal Global Trade Expo 2022 has successfully showcased the potential of West Bengal as a frontrunner among investment destinations in the country. The government will pro-actively provide all support to investors coming to the state.

“We also discussed with the senior West Bengal officials how to carry forward the momentum and business buzz created in West Bengal by the Bengal Global Business Summit 2022, The feedback is that even the sprawling 3.75 lac square feet of space on which the Bengal Global Trade Expo 2022 was held is not big enough to address the demand and response we got,” said Mr. Sushil Poddar, President, CWBTA.

“CWBTA would continue its efforts to translate the huge response generated by the Bengal Global Trade Expo 2022 into viable projects that would make West Bengal a frontrunner as an investment destination,” said Mr. N K Kapadia, Advisor and Summit Chairman, CWBTA.

Lauding the success of the EV pavilion at the BGTE 2022, Mr. Anuj Sharma, Chairman, Electric Vehicle Committee for e-rickshaw, Ministry of Road Transport and Highways, Government of India, representing over 1500 manufacturers from the EV sector, said, “The BGTE Expo 2022 has rightly showcased the Electric Vehicle sector.”

He also said, “We are working towards creating five major EV hubs in India. West Bengal can become one of the EV hubs of India. On behalf of my organization and with CWBTA, we would jointly request the West Bengal government to give us land within 30 kilometers of Kolkata International Airport along with incentives, logistics, and backup support to set up an EV manufacturing Park. I would request the West Bengal Government to support us through CWBTA and large trading companies to provide single window-fast-track operations in this regard. An EV hub in Bengal can create a lot of self-employment schemes and help drivers of e-rickshaws double their monthly income in the future. It will also create a base for a new breed of smart manufacturers, traders, and technology-savvy students.”

Many foreign businesses and consular representatives of The Republic of Korea, Japan, Bhutan, Bangladesh, Germany, and others have also visited the Expo. The Consul General of the People’s Republic of China, His Excellency, Mr. Zha Liyou, visited the Expo and held brief interaction with CWBTA President, Mr. Poddar, who said, “Kolkata and Kunming (K2K), the sister cities of India and China, must step up trade, business, cultural ties, and people-to-people contact in order to realise the fullest growth potential and benefit mutually,”

Kunming, aka Yunnan-Fu, is the largest city and the capital of China’s Yunnan province which was jointly declared as Kolkata’s sister city during former prime minister Manmohan Singh’s visit to Beijing in October 2015. The headquarters of many of Yunnan’s largest businesses are in Kunming.

“The ties between K2K or Kolkata and Kunming have not been realised to their fullest potential. I would suggest as a first step the Mayors of Kolkata and Kunming should visit each other’s cities and scout for new opportunities and forge new partnerships to unlock the huge growth potential which remains untapped. Also, people-to-people contact between the two cities can bring together musicians, artists, educators, opera artists, and others together and strengthen ties,” Mr. Liyou said.

Mr. Liyou informed that each year in June Kunming also organizes a trade and business Expo like the BGTE 2022. “The state government officials, mayor of Kolkata, various chambers, trade, and bodies of West Bengal should visit the Kunming Expo and identify focus areas to further trade, commerce, and joint ventures,” Mr. Liyou said. He further informed that eight Chinese companies are scouting for investment opportunities in West Bengal, the world’s largest ribbon manufacturer.

Welcoming Mr. Liyou’s suggestions, Mr. Sushil Poddar, President, CWBTA, said, “CWBTA, being the apex trade body of 1.5 million big and small traders and over 112 other trade associations, would carry forward the suggestions of His Excellency, Zha Liyou, and translate it into action. There is immense trade potential with the People’s Republic of China and eastern India which merits serious consideration and action.”

Mr. Yang Xuhong, Deputy General Manager of the world’s largest bank – Industrial and Commercial Bank of China Ltd (ICBC) – who visited the Trade Expo, praised the efforts made by the state government and CWBTA to organize the mega event. “ICBC is looking at the possibility of setting up a representative office or branch in Kolkata. We are focusing on providing financial support to the MSMEs and start-ups in West Bengal and the rest of India. We have deep experience in providing financial support in China.”

“West Bengal had earlier missed the bus as far a mobile phone business in India when Noida and Gurugram and some other cities garnered a chunk of the investments. Bengal should not commit the same mistake with the rising electric vehicles sector in India. There is a huge opportunity opening up in the EV segment which must be seized,” Mr. Xuhong said.

Mr. Kishan Jain, Director of Rs 2400-crore Gold medal Electricals visited the Expo and said, “We are very satisfied by participating in the Expo and have got a very good response. We are seriously considering West Bengal for our expansion plan and also participate in future expos and summits in a big way. We are interested in the trade and logistics park which CWBTA is planning to set up near Kolkata.”

The BGTE Expo- 2022 was spread over a 3.75 lac square feet area with 19 hangars, conference facilities, and dedicated pavilions for Government bodies and institutions, top companies, trade bodies, manufacturers, traders, financial institutions, and so on. A special hangar for the electric vehicle segment has specially been set up to showcase the latest products and services. Various colleges and institutions made arrangements for a large number of students to visit the Expo and attend seminars and discussions.

“This was the first time that the business community, traders, Government bodies, and chambers of commerce came together at the Bengal Global Trade Expo – 2022 to facilitate ease of doing business. The various departments of the Government of West Bengal had put up pavilions for on-spot registration of MSMEs. The Kolkata Municipal Corporation had set up a facility to resolve disputes, pay taxes and address various queries of the consumers. AMRI had set up a mini-hospital at the Expo,” said Mr. N K Kapadia, Advisor and Summit Chairman, CWBTA.

“CWBTA, which is working to set up a robust trade and commerce ecosystem in the eastern region, has achieved many milestones in promoting trade in the region. Last year, CWBTA conceptualised the Trade Excellence Award in order to appreciate and recognise the role of traders, achievers, and innovators in the economic growth of the country,” said Mr. C K Varadarajan, Honorary General Secretary, CWBTA.

Mr. Pradip Luhariwala, Treasurer, CWBTA, said, “The proposed CWBTA Rs 30-crore project to set up a 1.25 lakh square feet state-of-the-art Trading & Business Centre at Rajarhat, Salt Lake, will house, among others, facilities for permanent showcasing or display of a wide variety of products and services by more than thirty countries. This center will function round-the-clock throughout the year.”

“Some of the top brands cutting across different sectors along with leading banks and financial institutions participated at the Expo,” said Mr. S K Choraria, past president,” CWBTA.

“The food courts at the BGTE- 2022 served meals to over 2000 persons each day and had kept provisions for catering to huge visitors. Kolkata’s leading caterer Munna Halwai was engaged for this,” said Mr. Ravi Gupta, member, CWBTA.

“The regional trade in eastern India can double over the next few years with other free trade agreements with BIMSTEC countries expected to be signed soon,” said Mr. P L Shah, Vice-President, CWBTA.

“CWBTA has emerged as an apex organisation to articulate the demands and issues of traders across West Bengal,” said Mr. Pradip Luhariwala, Treasurer, CWBTA.

“The BGTE 2022 showcased a huge range of products and services that would expand the volume of trading in the future,” said Mr. Asish Agarwal, member, CWBTA.

The BGTE-2022 is providing a unique opportunity to small traders to be a part of a mega show to showcase their products and services to a national and global audience, said Mr. Amit Bagri, member, CWBTA.

The CWBTA has worked out plans to set up in phases a Rs 100-crore Trade Logistics & Industrial Park spread over 400 acres at Amta, Howrah, for which land is being procured and is expected to be completed by 2025. Another Rs 30-crore project to set up a 1.25 lakh square feet state-of-the-art Trading & Business Centre at Rajarhat, Salt Lake, is also underway. This most modern trading centre will house, among others, facilities for permanent showcasing or display of a wide variety of products and services by more than thirty countries. This center will function round-the-clock throughout the year. The West Bengal Government is supporting CWBTA to procure land and also ensure that the projects meet the deadline for completion.

“This is the first time in West Bengal that a trade body has taken an initiative to build logistics and infrastructure projects in order to boost regional trading. The Trade Logistics & Industrial Park of CWBTA at Amta, Howrah, will have residential facilities for staff and cater to almost all major logistical and infrastructure needs of the traders in the region. On the other hand, the Trading & Business Centre at Rajarhat would be a business-to-business (B2B) trading hub involving not only the neighbouring countries but also other countries far off. These twin projects of CWBTA will greatly boost regional trade,” said Mr. Sushil Poddar.

Trading in the Eastern region is poised for robust growth with Bangladesh emerging as the fifth largest trading partner of India and the proposal by India to work on the Bay of Bengal Initiative for Multi-Sectoral Technical and Economic Cooperation (BIMSTEC) Free Trade Agreement. Besides India, Bangladesh, Bhutan, Nepal, Thailand, Myanmar, and Sri Lanka are the other BIMSTEC member countries.