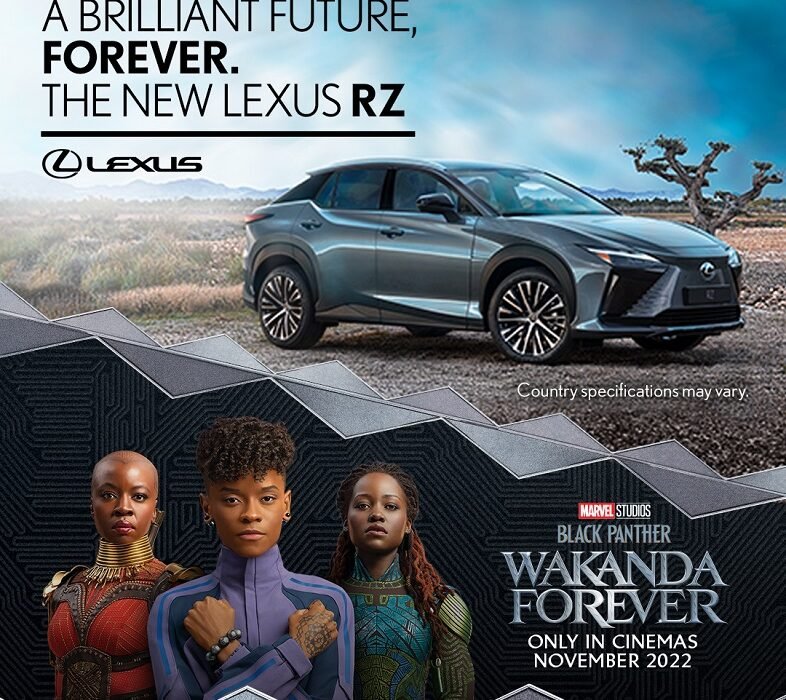 11th November 2022, India: Joining forces, Marvel Studios, Black Panther, and Lexus unite as the official automotive partner for the much-awaited Black Panther, Wakanda Forever. To join the ranks of the nation of Wakanda’s elite warriors led by Dora Milaje, one must possess extraordinary qualities including their choice of mode of transportation too. Enter the all-new, all-electric RZ 450e, Lexus’ technologically advanced battery electric vehicle that brings another specialized trait to the Dora Milaje’s arsenal: An electrifying attitude.

Quick thinking, a spear, and the all-new, very agile, 2023 Lexus RZ 450e are all you need when you’re the formidable Dora Milaje, evading a host of villainous pursuers. Marvel Studios fans and car enthusiasts can buckle up and take a ride with the squad of Wakanda warriors as Lexus debuts its marketing campaign, including a long-form video, “An Electric Future,” featuring the luxury brand’s first-ever battery-electric vehicle.

Directed by Anthony Leonardi III embodying authenticity to its truest form, the visually thrilling spot finds General Okoye (played by Danai Gurira) inside the RZ 450e, as she prepares to fulfill her national duty in the unfamiliar role of a public speaker. General Okoye is joined by her fellow Dora Milaje as they embark on what becomes a car chase experience filled with spectacular jinks, explosions, and pin-point accurate vibranium spear throws.

In the thrilling piece, the stylish and powerful RZ 450e provides perfect agility for the fearless Dora Milaje to protect Wakanda against its fiercest foes. This formidable squad of women warriors navigates impending danger and takes electrification to a whole new level in the luxurious, well-appointed interior of the amazingly quick and nimble Lexus RZ 450e.

Speaking on the association, Mr. Naveen Soni, President, of Lexus India commented, “We are excited to once again be a part of this future-forward, powerful collaboration with Marvel Studios for the Black Panther: Wakanda Forever movie. The all-electric RZ 450e known for its authenticity, innovation, and technology is a perfect fit for the franchise, and we are delighted for this much-awaited movie to reach the wider audience.”