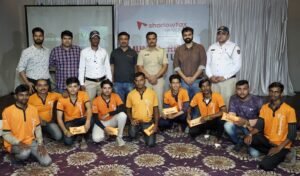 logistics platform for last-mile delivery, is on a hiring spree this quarter. The logistics platform has launched the Shadowfax Champions League: The Biggest Ever Referral Contest to accelerate hiring this season. During the contest, existing partners can win up to Rs 4000 as a referral bonus by referring candidates to join Shadowfax. The contest will run between October 10 and November 15, 2022.

Besides Rs 4000, the delivery partners also have an opportunity to win prizes like a Renault car, Royal Enfield bike or an exotic trip to Thailand, New joiners can also benefit from this campaign as they can win up to Rs 1000 as a bonus on fulfilling certain conditions. Shadowfax has also planned to reward delivery partners with gold coins and cash prizes to those who will be able to deliver the highest number of orders during the festive season.

The spokesperson of Shadowfax said, “We are hiring delivery partners across the country in this quarter for hyperlocal deliveries. We have launched Shadowfax Champions League which is the biggest-ever referral program to propel our hiring spree. During this hiring spree, our existing partners can refer new joiners and win up to Rs 4000 as a referral bonus, along with exciting gifts like cars, bike and exotic trip. With the increase in demand for delivery services, we are taking steps to fulfill our vision of last-mile delivery and emerge as a trusted partner of our clients.”

The referral programs introduced by Shadowfax include Man of the Series, Star of the Week and Catch of the Day.