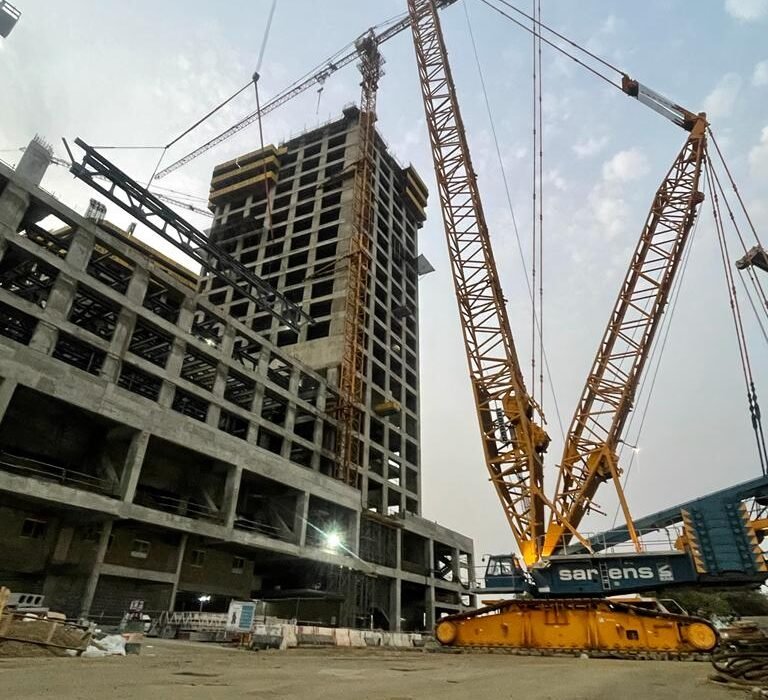 Jeddah, the host city of the Saudi Arabian Formula 1 Grand Prix from 2021, has strengthened its offer of luxury accommodation and leisure facilities, which was limited until now, thanks to this new hotel.

The new hotel is built on an area of 200,000 m2 in the Al-Shatee neighbourhood, and will include 275 conventional beds, 25 service rooms, 50 branded apartments and an eight-storey retail podium among other leisure facilities.

Sarens, world leader in heavy lifting, engineered transport and crane rental, has participated in this strategic project for tourism in the region with the lifting and installation of trusses weighing approximately 63.5 tons for the construction of the ballroom, at heights between 30 and 90 metres.

The new Four Seasons Hotel Jeddah, currently under construction, will directly contribute to attracting more luxury tourists to the region and boost local economy, thanks to its commitment to a state-of-the-art design building equipped with all kinds of leisure, shopping and entertainment facilities. This new building, that resembles two twin gateways on top of a podium, will complement a very limited luxury hotel offer until now.

The city of Jeddah, located in the coastal area of the Kingdom of Saudi Arabia, hosts the Saudi Arabian Formula 1 Grand Prix from 2021. Many of the participating teams have had to book their rooms outside the city and travel the distance to the city by road, due to the shortage of luxury hotels, which will now be more balanced thanks to the new Four Seasons Hotel.

Once inaugurated, the new five-star hotel will increase the hotel offer in Jeddahby 275 conventional hotel beds, in addition to 25 serviced rooms and 50 branded apartments, an eight-storey retail podium and a basement for parking and guest services among others.

To carry out the installation of the ballroom trusses that make up the podium at heights of between 30 and 90 metres, the construction company Al-Hasemiah Contracting Company L.L.C. decided to turn to Sarens due to its extensive international experience in projects of similar significance. For this project, which was to be carried out using four lifting points with eccentric COG without a spreader, Sarens used two Liebherr LR1750 crane units, one in SLDB 119m configuration, and a second in SWDB configuration with a 77m main boom and 70 m of flyjib.

All the machinery used by Sarens was transported to Jeddah by road from Jubail, a journey that required the participation of 35 trailers and a week to cover more than 1,400 km. Once at their destination, traffic had to be shut down for the operation of the LR1750 cranes to ensure a 106m max radius perimeter for the lifting of structures up to 63.5 tons.

In addition to the difficulty of having to operate in a confined space in the middle of the residential area of Al-Shatee, an area characterised by the presence of single-family villas and multi-storey apartment buildings with usually heavy traffic, the Sarens operators on site had to deal with strong gusts of wind during the six weeks of work, due to the proximity of the sea, which made lifting the heavy loads very difficult.

Once inaugurated, this new building, which design process began in 2016, will represent an important qualitative leap for Jeddah’s hotel and leisure offer. In addition to the area operated by Four Seasons Hotel, the building’s common areas will offer parking for 900 vehicles in its basement, another 115 parking spaces at ground level, and a further 754 spaces in the commercial area. In addition, the rooftop podium will feature hanging gardens with outdoor swimming pools, spa and solarium areas, restaurants and children’s play areas.

Sarens has extensive international experience in the development of civil construction projects. Among other projects, has participated in the construction of the Expo 2022 Stadium in Dubai, the renovation of the roof of the FC Metz stadium in France, and the improvement of Union Station and the CIBC Square building in Toronto.