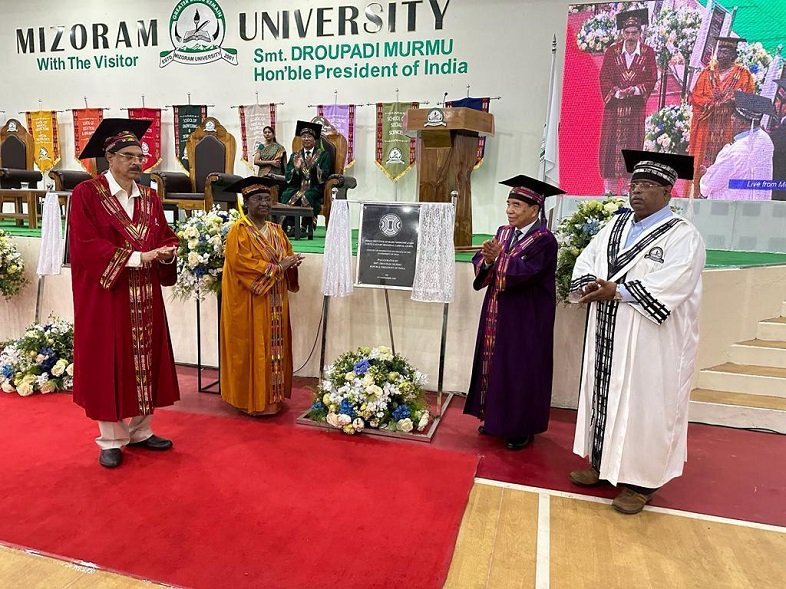 Aizawl, November 04: Smt. Droupadi Murmu, the President of India on her visit to Mizoram inaugurated the permanent North-East Campus of the Indian Institute of Mass Communication North East at Aizawl today. The Campus shall be running postgraduate diploma courses in English Journalism and Digital Media besides short-duration media & communication courses.

The Indian Institute of Mass Communication (IIMC), an autonomous body under the Ministry of Information and Broadcasting, Government of India, is a premier Institute of Journalism in the country. With the main Campus in New Delhi, IIMC has five regional campuses at Dhenkanal in Odisha, Aizawl in Mizoram, Jammu in J&K, Kottayam in Kerala, and Amravati in Maharashtra. The Regional Campuses have been set up with the aim of catering to different regions and meeting the need for media education across the country.

The IIMC North East Campus began functioning in 2011 from a temporary building made available by Mizoram University. The construction work for the campus began in 2015 and was completed in 2019. The total cost is Rs 25 crores. The IIMC permanent campus on the 8 acres of land given by Mizoram University has separate Administrative and Academic buildings along with hostels and staff quarters.

Since its inauguration in 2011, the Institute is headed by Shri LR Sailo, Regional Director, who has decades of experience in the field of public relations and also served as the Director, Information and Public Relations, Govt. of Mizoram, for over twenty years

The Indian Institute of Mass Communication (IIMC), New Delhi was inaugurated in 1965 to cater to the training needs of media professionals in the country and other developing countries. It has ever since functioned as a training institute for the Indian Information Service also.