Symbiosis Law School Pune (SLS-P), a constituent of Symbiosis International (Deemed University) virtually hosted the Seventh Edition of Symbiosis Law School, Pune – International Criminal Trial Advocacy Competition, 2022 (SICTA 2022) from 21st April to 24th April 2022. The Inaugural Ceremony was organized on 21st April 2022 on the virtual platform, Zoom at 5:00 PM IST. There were 440 participants who had joined for the event.

Followed by virtual lighting of the lamp, the welcome address was delivered by Dr. Shashikala Gurpur, Director, SLS-P, Dean Faculty of Law, SI(DU), Fulbright Scholar, and Jean Monnet Chair Professor (EU-LAMP co-funded by EU). She recollected the journey of SICTA over the years and its inception. She emphasized the importance of the theme in the context of International Humanitarian Laws and in the light of insurgency, cross-border conflicts, and migrations. Dr. Gurpur noted that India not being a signatory to several International Humanitarian Law treaties and conventions poses a huge challenge to the judiciary and legal fraternity. She remarked,“SICTA is not simply a competition, but a co-curricular activity that enhances a student’s knowledge and competence”. Dr. Gurpur extended heartfelt gratitude to the 21 participating teams of SICTA 2022. 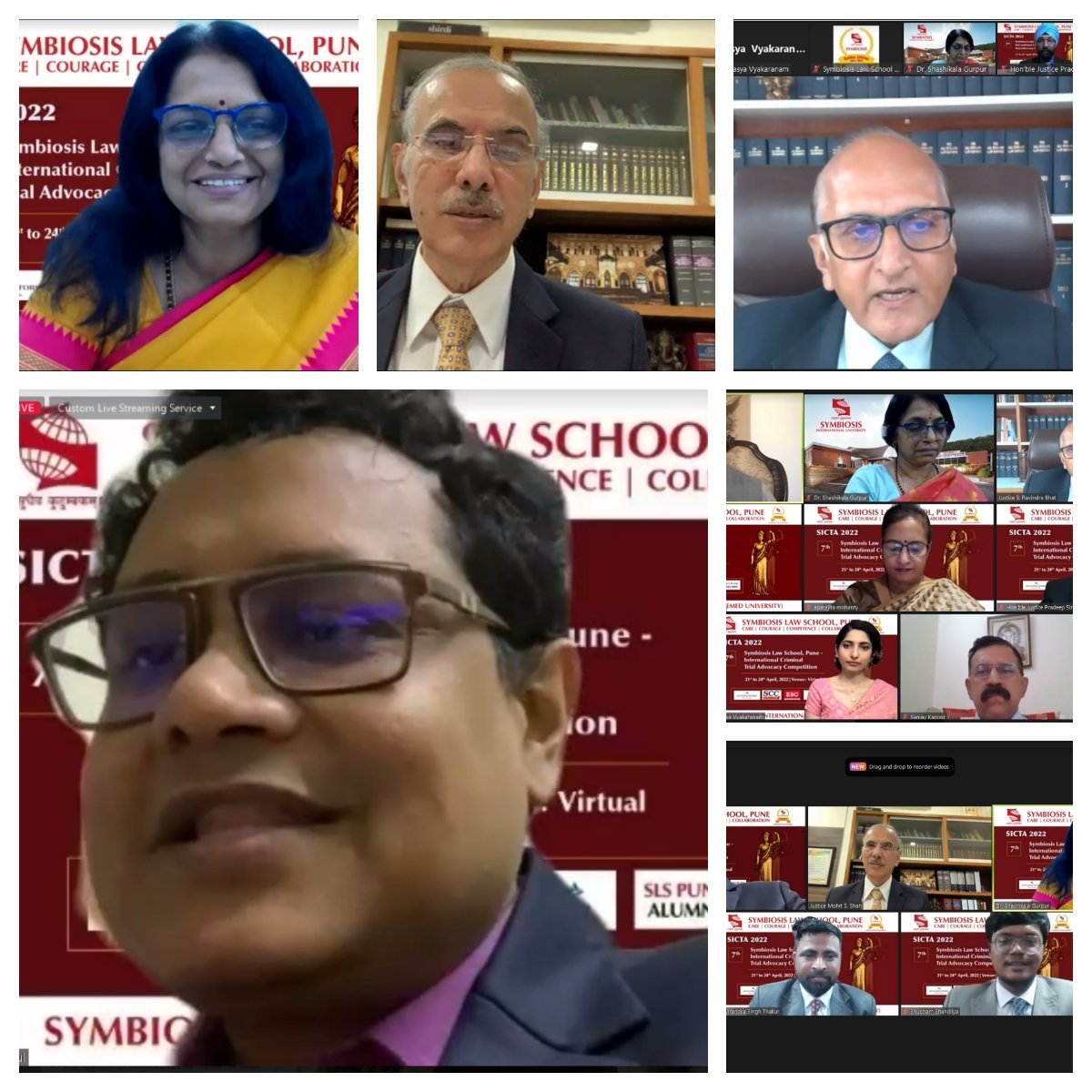 SICTA 2022 was graced by Barrister Tapas Kanti Baul, Prosecutor, International Crimes Tribunal, Bangladesh as the Guest of Honour. At the outset, he commended the students of SLS-P in their online internship with the Bangladesh International Crimes Tribunal. He shed light on the of the Tribunal and the conditions that led to its establishment. Advocate Baul talked about his experiences as a judge in criminal advocacy competitions. He looked forward to judging SICTA 2022 as in this competition, participants would be mooting at a trial stage. According to Advocate Tapas Baul, “every case is a challenge and every case poses new questions”. He concluded with his valuable and practical insights into the world of criminal trial advocacy.

Hon’ble Mr. Justice Mohit Shantilal Shah, Former Chief Justice, Bombay High Court delivered the Chief Guests’ Address. He concurred with Advocate Baul on the ground that trial court advocacy is more challenging than advocacy before appellate courts. Hon’ble Justice Mohit Shah went on to note how SLS Pune has carved a niche for itself in terms of its curriculum and work. According to him, the “sky is the limit for law students” and SICTA 2022 would greatly help students pursue a career in the realm of international criminal and humanitarian laws. Hon’ble Justice Shah spoke about grave war crimes unleashed upon humanity by the two world wars and how the perpetual need of an international criminal adjudicating authority was felt. He highlighted how the preamble to the Rome statute of the ICC vividly captures the underlying spirit of the Court. Hon’ble Justice Shah dwelled on the advancement in technology and noted that “scientific advancements can turn out to be boon or bane”. With this, he remarked that the Autonomous Weapons System has opened a “Pandora’s box of an ethical and moral dilemma”. Hon’ble Justice Shah noted the relevance of the present theme in the light of current developments and declared SICTA 2022 open. Dr. Dhanaji Jadhav Deputy, Director (Administration), Symbiosis Law School, Pune delivered the Vote of Thanks to all in attendance.

Day 4 of SICTA 2022 concluded with the valedictory ceremony held on April 24th, 2022, at 6:00 PM.  It began with the welcome address of Dr. Shashikala Gurpur, Fulbright Scholar, Jean Monnet Chair Professor (EU-LAMP co-funded by EU) Director, SLS-P, Dean Faculty of Law, SIU. At the outset, Dr. Gurpur welcomed the dignitaries and noted how influential their presence has been on SICTA 2022.

Hon’ble Justice Pradeep Singh Yerur, Judge, High Court of Karnataka, who was the Guest of Honour, articulated that in the long session held, all the participants did a wonderful job in their submissions and the novel arguments put forth. Hon’ble Justice Ravindra Bhatt, Judge, Supreme Court of India then delivered the Chief Guest’s Address. He noted that the debate on the intersection of AI, its weaponization, and human rights is difficult for even the most experienced practitioners which makes the research done by all participants regarding the polarizing issues a highly commendable feat. Mr. Mohan Pieris, Permanent Representative of Sri Lanka to The United Nations, who was the Guest of Honour, addressed the students and expressed his delight in being back at SLS, Pune. He noted that the participants are being trained to win some cases and perhaps lose some too, but with respect and amiability.

The valedictory included the announcements of winners for the various categories of awards online. The first category was for Best Witness which was bagged by Defence Witness 1, Gaea Sukumar, and Victim Witness 1, Tanvi Chupal, for the first and second-best witnesses. Lloyd Law College won the prize for the best memorial and Kathmandu University School of Law won it for the second-best.

The Late Yogini Kamdar Memorial Award for the Best Lady Student Advocate went to Samika Verma of the Army institute of law while the Shree P.V. Ramanayaa Memorial Award for the Best Prosecutor went to Dharmil Doshi of Pravin Gandhi College of Law. The Late Ishwari Prasad Begaria Award for the Best Defence Advocate went to Swikriti Thakur of Kathmandu University School of Law in the International Category and to Lubaina Sutarwala of Government Law College, Mumbai in the National Category. Finally, the winning teams were announced. Rajiv Gandhi National University of Law, Patiala was declared to be the Winners of the Competition while Lloyd Law College and Symbiosis Law School, Noida got the position of First Runners-Up and Second Runners-Up respectively.

The valedictory ceremony ended on a successful note with the Vote of Thanks being delivered by Dr. Aparajita Mohanty, Deputy Director (Academics), SLS-P.