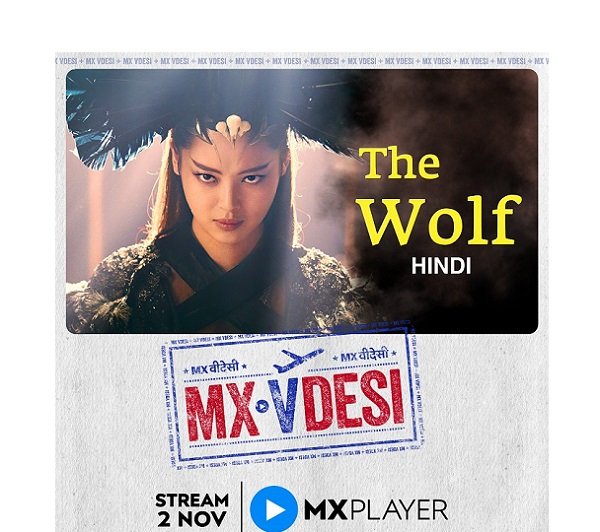 31st October, 2022, Mumbai India: Bringing you a wide array of stories from around the world, MX Player promises a bingeworthy November with its slate of Vdesi shows. Are you into Korean, Chinese, or Philippine dramas? Look no further! Here’s a list of everything that MX Player is bringing this November:

‘The Wolf’ has attracted a lot of interest and discussion since its premiere. And now you can watch the show on MX Player to know why. The Wolf is a costume and romance drama that follows the life of Ma Zhai Xing, a government official’s daughter who befriends a wolf-raised boy in her teenage years and is forced to quit contact with him due to a political conspiracy. Eight years later, she meets him again, only to find that he has become Prince Bo, the royal prince working for the King. Struggling between self-consciousness, power, and loyalty, the two are inevitably involved into a battle to defend their deep-rooted love. Amidst all these tensions, the two finally find their happiness? All 49 episodes will be available in Hindi from 2nd November.

Buckle up for an exciting ride with this one! Return starts out as a “Who did it?” type story where almost everyone is a suspect at one time or another as we try to find a murderer. Return is a suspense drama about a group of friends from the rich, elite class who find themselves caught up in a murder mystery, and their lies and deceptions start a chain reaction of things going from bad to worse as they try to cover things up. Find all 17 episodes in multiple languages including Hindi, Tamil, Telugu, Marathi, Bengali, Kannada, and Malayalam from 5th November.

A single mother, who is out of means to fund her son’s heart surgery, is compelled to do the unthinkable to prolong the life of her child. Her past comes to haunt her years later, pushing her to confess to a horrendous crime. This Philippine crime drama stars real life mother son – which is a chemistry that is a must watch! All 55 episodes of the series will be available in Hindi from 9th November.

The Last Empress is set in a fictional South Korea which operates under a constitutional monarchy. It follows a musical actress who marries the emperor and becomes involved in the palace power struggle and a mysterious murder. Then there’s a palace bodyguard who is out for revenge against the emperor. Tune in every week to watch all 26 episodes in various languages like Hindi, Tamil, Telugu, Marathi, Bengali, Kannada, and Malayalam from 12th November.

Artificial City is a psychological mystery thriller that tells the story of things which lose their meaning when greed and power comes into play. Set against the backdrop of an art museum that belongs to Sung Jin Group, a major conglomerate that holds the reins of the political and financial spheres of South Korea, the drama is about the ambitions of women who strive to reach the highest position in the nation. MX Player brings to you all 16 episodes in Hindi from 19th November.

Following the mysterious death of an elderly priest, an NIS agent turned priest attempts to bring the culprits involved before law. The hilarious journey in taking down the gangsters and corrupt officials in the city is what follows. All 20 episodes of this action comedy will be available in MX Player in several languages including Hindi, Tamil, Telugu, Marathi, Bengali, Kannada, and Malayalam from 16th November.

Investigating a series of murders in Toulon, a police inspector and his former colleague detect a killer gang working for the Serbian mafia. Two criminals keep breaking all laws and stop at nothing and the investigators also don’t cease to stop. All 35 episodes of this investigation drama will be available from 23rd November in Hindi only on MX Player.

Depicting the daily lives of three 30-year-old best friends, this romantic comedy is a show with a show in the backdrop. A slice-of-life drama, Be Melodramatic follows their lives as they try to be successful in the entertainment industry, while also dealing with their personal issues, love lives, and friendships. MX Player brings the melodramatic drama to you on 26th November in Hindi.

Legal High is a courtroom drama with comedic leanings featuring two main characters: one, a shrewd lawyer who has never lost a lawsuit, and two, an up-and-coming lawyer with a strong sense of justice. Watch their journeys unfold on MX Player on 30th November in Hindi.