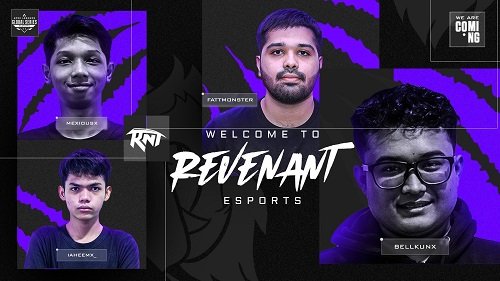 Revenant Esports will be the only organization from India to be playing the ALGC Playoffs in Sweden against world-class organizations like G2 Esports, Cloud9, TSM & 100 Thieves to name a few.

The roster will be seen representing Revenant Esports in the Apex Legends Global Series Split 2 Playoffs in Sweden, on the 29th April to 1st May, 2022.

Rohit N Jagasia, Founder & CEO of Revenant Esports said “Apex Legends via the Apex Legends Global Series has managed to build a solid viewership in the past couple of months and has been ranked in the top 5 most viewed constantly on Twitch. There is a massive potential for the Apex Legends esports scene to continue to grow with our new signings, and we are highly ambitious to make Revenant a global organization.”

The entry of Revenant Esports into this brand new title has caught everyone’s attention from the South Asian Esports Industry.

Hasan Ali “FATTMONSTER” Naqvi added, “ We are so excited to have joined Revenant Esports. Being one of the fastest growing organizations in India and along the entire onboarding process, Rohit & the team gave us a lot of confidence that we have found a comfortable home here at Revenant Esports from being Free Agents. Being the only Indian organization competing at the ALGS Split 2 Playoff in Stockholm makes me very proud since I am also the only Indian Coach / Player at the event. Our players from Indonesia are very excited to have joined Revenant Esports as well & are looking forward to the exciting future. We are hoping to bring the trophy home from Stockholm.”