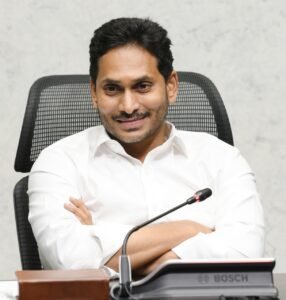 Amaravati, Andhra Pradesh, 19 October 2022: Andhra Pradesh Chief Minister Y S Jagan Mohan Reddy instructed the officials that the quality of re-survey is important, including the realization of villages free from land disputes during the revenue, survey, settlements, and records department review meeting at the camp office in Tadepalli on Tuesday.

The officials briefed the Chief Minister regarding the YSR Jagananna Saswata Bhoo Hakku and Bhoo Raksha scheme progress in the state.

“The quality is very important in re-survey. Once the process is completed, the villages should be free of land disputes. Mobile tribunals, boundary classifications, subdivisions, and the entire process of resurvey should be constantly monitored,” said Chief Minister YS Jagan.

He added that the issues arising during the re-survey should be dealt with in a planned manner to satisfaction of the people. The officials should work towards the complete solutions to the land problems, said the Chief Minister.

Noting the revenue system would be thoroughly cleansed through the survey, the Chief Minister said, “All records and data will be clear once everything is completed. Many people are maligning the program and trying to create misconceptions to undermine the effort and credibility of the government,” said Chief Minister.

He further said for surveying after 100 years, the government has recruited a few thousand people and bought state-of-the-art equipment at the expense of crores of rupees. “Keeping this in mind, the survey program should be carried forward without errors. Not a single right document should go to the farmers with errors and mistakes,” said Chief Minister YS Jagan.

The Chief Minister directed the officials to ensure that a registration office is also set up in the concerned village secretariat after the survey is completed.

Officials said drones were used in 6,037 villages in which revenue records were finalized in 1,545 villages. “We are surveying an area of 13,335 square kilometers every month. The use of airplanes and helicopters in areas that are not suitable for flying drones was also in process. Further, the first batch of rights documents will be provided in the villages in November’s first week by the Chief Minister,” said the officials.

In terms of urban areas, the government is in the process of resurveying 123 urban local bodies, which have 15,02,392 acres. “The survey process will start in January, and the distribution of rights documents will start in May. The whole process will be completed by August 2023,” said the officials.