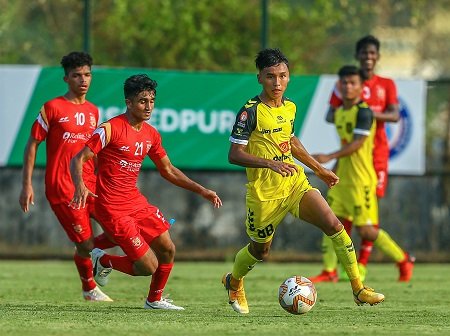 Goa: Shameel Chembakath’s Hyderabad FC reserve side bounced back in fine fashion as they registered a 2-1 win over Reliance Foundation Young Champs in their second game of the Reliance Foundation Development League at the Benaulim Football Ground in South Goa, on Wednesday.

Razibul Mistry opened the scoring on the evening for the opponents in the 32nd minute with a penalty, but two goals in the space of four minutes at the hour mark helped Hyderabad FC to their first win in their RFDL campaign.

HFC kept the pressure on and managed to equalize in the 62nd minute when RFYC’s Chingambam Shivaldo scored an own goal turning Abdul Rabeeh’s cross in from the right into his own net. Bishnu Bordoloi meanwhile scored from close range in the 64th minute to give us a lead and the strike proved to be the eventual winner.

Earlier, Lalchungnunga Chhangte and Abdul Rabeeh came close in the first half when they each hit the post, while Lalbiakhlua Jongte, who almost kept out the spot-kick, also pulled out a fine save late in the game to keep HFC’s lead at the final whistle.

Having picked up their first win, HFC are back in action in the RFDL when they take on Bengaluru FC at Benaulim in a 4:30pm kick-off on April 24.