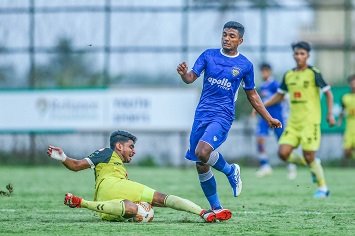 Goa: Hyderabad FC registered their second consecutive victory in the Reliance Foundation Development League as they secured all three points on a testing Saturday evening against a spirited Chennaiyin FC side at Benaulim.

This 3-2 win takes HFC to 10 points from six games in the RFDL as they stay in the third position.

Abijith PA (21’) and Lalchungnunga Chhangte (39’) were on target for Hyderabad while Johnson Mathews (29’) and Solaimalai (57’) scored for Chennaiyin as the game stayed in balance, before Muhammed Rafi (85’) netted the all-important goal for HFC in the final minutes of the game.

Shameel Chembakath named an unchanged XI to the side that beat Mumbai City FC 5-0 in the previous round and saw his side put on a spirited display on a tough evening in Goa.

While both teams started off strong, keeping things tight at the back, it took just over 20 minutes for Hyderabad to find the back of the net. A well worked move down our right, left Devansh Dabas to make three superb saves but Abijith PA was finally there to slot it home and give HFC and deserved lead.

But the lead lasted just nine minutes as CFC skipper Johnson Mathews got to the end of a through ball and managed to beat Lalbiakhlua Jongte on goal, despite the keeper’s valiant efforts.

The action for the half was not done yet as Lalchungnunga Chhangte gave HFC the lead once again. Abdul Rabeeh came up with a defense splitting pass after the hosts were caught in possession high up the field and Chhangte left a couple of CFC defenders for dead and fired it home in style.

Abijith and Chhangte came close again before the break, but the next goal came from Chennaiyin, just over 10 minutes into the restart.

Solaimalai, who was lively throughout the game, made no mistake from close range after a lucky deflection fell to his path nicely. He made it 2-2 with half an hour to play setting up a nervous finish at Benaulim.

But finally, the tie was settled by defender Muhammad Rafi, who came up for a corner, and blasted one in from the edge of the box. This was the third time HFC took a lead in the game but this time, they managed to shut out at the other end, to register what was their third win of the campaign.

Rabeeh, Bishnu Bordoloi and Joseph Sunny picked up assists on the night while the likes of Mark Zothanpuia, Koustav Dutta, Deep Samantha and Dipu Halder were at the top of the game to help their side to a crucial win.

HFC are back in action when they take on Jamshedpur FC in the final game of the Reliance Foundation Development League in an 8:00am kickoff at Nagoa on Thursday, May 12.