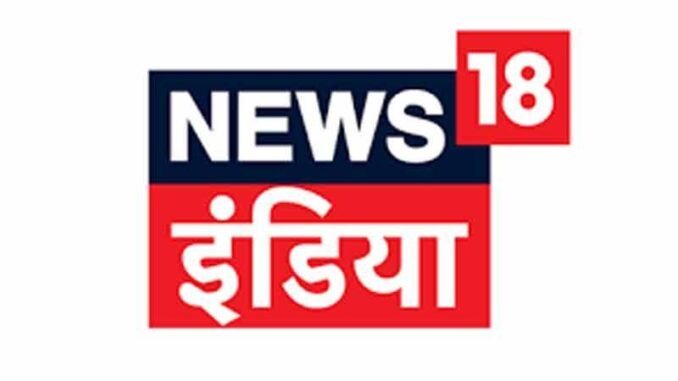 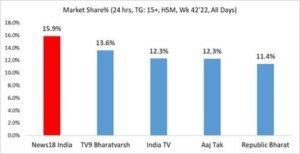 New Delhi: The country’s most watched News channel News18 India has cemented its lead in the genre. As per the recent BARC data for week 39-42’22, the channel is 29% ahead of AajTak, which has now dropped to the fourth position on the viewership charts. 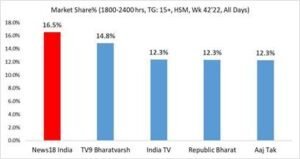 Additionally, News18 India has retained its No.1 position during 9-10 PM, the most prestigious time band in the National Hindi News genre where News18 India’s Kishore Ajwani show is ahead of India TV’s Rajat Sharma and AajTak’s star anchor Sudhir Chaudhary. While News18 India dominated the news segment with 18.7% market share, India TV managed 16.2 %, followed by Republic Bharat with 15% and AajTak with 13.6% respectively as per BARC data (Market Share%, 2100- 2200hrs, TG:15+ HSM, week 39-42’22, Mon-Fri).

News18 India has also been outperforming the top General Entertainment Channels in terms of reach, as per the weekly BARC data.

Even on the digital front, the News18 brands have been garnering solid traction with its views increasing steadily across YouTube and other social media platforms.

News18 has been heavily investing in technology and editorial resources to ensure that its content and presentation remains uniquely curated for the audience and far ahead of the competition.