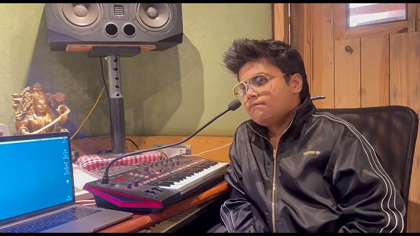 Already lauded by audiences all over the world for his recent hit song ‘Kal Chutti Hai’, we saw the Global Superstar Rego B surprise us each week by performing songs from his Grandfather Bappi Lahiri’s list in his own distinct way. This time, he went above and beyond to surprise us by performing a new version of Labrinth’s “Jealous.”

“Jealous” is a song by English electronic musician Labrinth. The song was written with Josh Kear and Natalie Hemby and released in 2014. Gustave Rudman composed the track, which was produced by Labrinth. This “heart-breaking ballad” song is dedicated to one of Labrinth’s parents, who abandoned the family when he was four years old. In the song, Labrinth explains, ‘A lot of people have been through that experience. It’s kind of written from the perspective of how my family felt at the time, but I wanted to write it so anyone could dig into the song and relate to it to their own situation.’

Rego B was born with music in his veins, and he exudes the same style and vigour as his grandfather at his prime. With this attempt at reproducing a song that has been stuck to the brain of more than two generations, Rego-B has demonstrated not only remarkable singing talent, but also sensitivity and awareness of soulful music.

Speaking about this new youtube video Rego-B said, “I’m a huge fan of International songs. ‘Jealous’ is a very touching song and I have been wanting to attempt this song since a long time. Now that I have finally sung it, I hope everyone likes it.”