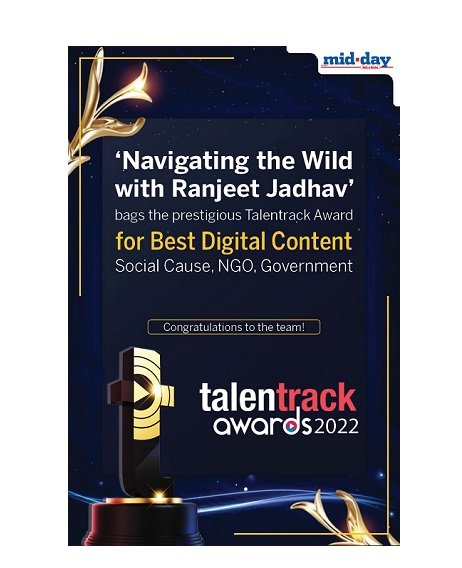 17th October 2022, Mumbai: Mid-day, Mumbai’s home-grown and leading tabloid has won the ‘Best digital content—social cause, NGO, government’ for its distinctive video series – Navigating the Wild with Ranjeet Jadhav. The award was announced by Talentrack Awards at its
2022 edition on 8 th September 2022 in Mumbai.

Recognizing the increasing urgency of preserving the rich wildlife and natural green cover of Maharashtra, Mid-day developed the video series in an attempt to create awareness about the existing wildlife and citizens’ efforts to understand as well as co-exist with the same. The pilot episode of the series ‘Camera Trappers of Aarey Forest’ showcases the untold stories of how like-minded heroes are working for wildlife conservation in Maharashtra by tracking leopard activity in Mumbai’s Aarey Forest.

Mid-day’s senior environment journalist, and wildlife and infrastructure correspondent, Ranjeet Jadhav is part of the group of citizens who installed DSLR camera traps in Aarey Colony to monitor movement of leopards and other wildlife. This project has also proved helpful for the Maharashtra Forest Department in tracking the wild cats and reducing human-animal conflict incidents. The leopard activity data gathered by the team over the years also exhibited the extraordinary story of their coexistence with humans in the forests of Mumbai, which has one of the highest densities of leopards in the world.

Expressing his joy about the win, Ranjeet Jadhav said, “I am very thrilled to have been awarded for Best Digital Content at Talentrack 2022. We have been committed to preserve the wildlife and biodiversity in Maharashtra for many years, but this is the first time we’ve chosen a different medium – digital content. I sincerely thank the jury for recognizing our efforts and I dedicate this award to my editors and colleagues at mid day for making this happen.”

Commenting on the overwhelming response and success of the series, Rachna Kanwar, Chief Operating Officer – Digital Media, Radio City and Mid-day said, “After talks of the recent political and infrastructural development plans put Aarey, Mumbai’s green lung, in the spotlight, it became crucial to draw attention towards the importance of preserving the rich wildlife and biodiversity of the city. The idea for ‘Navigating the Wild’ video series thus took roots in our hearts and the end-product was simply outstanding. While the audience’s response was thrilling and fulfilling, the ‘Best digital content—social cause, NGO, government’ award by Talentrack is a testament that Mid-day truly knows the heart of the city and beats one with it. We thank the Talentrack Awards team and jury for this honor.”

Over the years, Mid-day has built a loyal readership online by delivering credible and exclusive stories as well as innovative content that caters to a diverse audience through various media. After award-winning podcasts like The Bombay Film Story with Mayank Shekhar and Mid-day’s Mumbai Cricket Podcast with Clayton Murzello, Mid-day has also tapped into the fitness domain with The Healthy Gossip podcast and Fitness Forward video series, with Sonia Lulla.