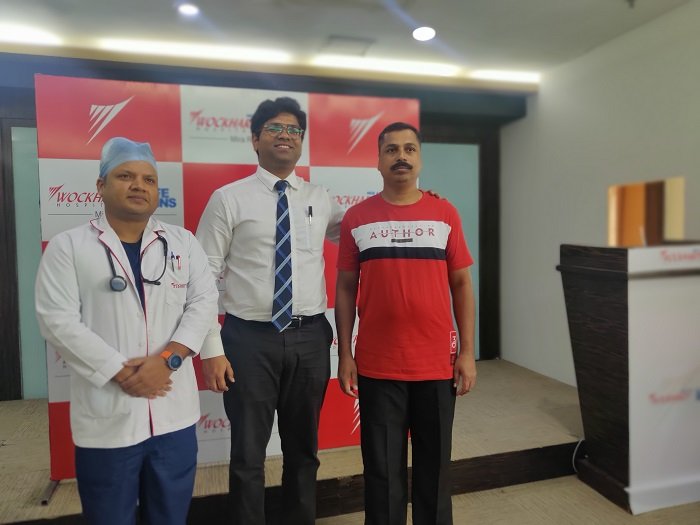 0
Read Time:3 Minute, 29 Second
Mumbai: A team led by Dr. Girish Bhalerao, Consultant Orthopaedic Surgeon, Wockhardt Hospitals, Mira Road, successfully saved the legs of a 44-year-old highway policeman who was an accident victim and suffered from polytrauma. The patient who was unable to walk for approximately 2 months now stands on his feet again after restoring his lower limbs.
Highway Policeman Sachin Dhanivire, age 44 years, a resident of underwent polytrauma. He was on duty on a Highway and met with a ghastly accident. He was hit by a truck (heavy vehicle) on Boisar Highway. Both people on the two-wheeler, the patient and the constable were severely injured and had multiple fractures. The patient suffered fractures in both thigh bones, (Femur) shaft, comminuted fracture of the right proximal leg bone (the tibial plateau) with degloving injury to the right knee exposing bones, muscles, and other side tissues and an arm fracture (Humerus shaft). The patient’s right lower limb side’s entire bones were shattered with open skin, bones, and vasculature. The patient was primarily treated at a nearby local hospital, however looking at such a grave situation they referred him to higher centers. In inquiry few suggested amputation with questionable viability of the right lower limb as the neurovascular compromise had already set in.

Dr. Girish Bhalerao, Consultant Orthopaedic Surgeon, Wockhardt Hospitals, Mira Road said, “On arrival in the emergency department on 22nd April 2022, a patient was brought in an ambulance and was assessed for hemorrhagic shock-like symptoms. He was primarily stabilized in accordance with ATLS (Advanced Trauma Life Support) protocol. Appropriate radiological and lab tests were done to confirm the diagnosis and the patient was shifted to wards for further haemodynamic stabilization and observation.

Polytrauma means someone who is subjected to injuries to multiple body systems – in this case, multiple fractures of the musculoskeletal system, peripheral nervous system – injury to the common peroneal nerve, degloving injury to superficial & deep dermal tissue of thigh and legs and hemodynamic disarray caused by this motor vehicle accidents. His entire wound was exposed to bones, muscles, and blood vessels.
His bones were protected and his lower limb has been restored to normalcy. He was operated in a sequential manner with multiple surgeries one after another to maintain hemodynamic status and normal physiology. Both Thigh bone (Femur) fractures were fixed using a long Interlocking intramedullary Nail, the proximal Leg bone( Tibia ) was fixed using bicolumnar plating with bone grafting, the degloving injury was fixed with assistance from Dr. Sushil Nehte, Plastic Surgeon. He has been recovering with Physiotherapy and Rehabilitation. The common peroneal nerve is still recovering under supervised nerve simulations and Physiotherapy. His legs were saved and now he is completely functional for activities of daily living Before discharge he was able to maintain his gait, he walked with the help of a walker and then became independent. He can now even ride two or four-wheelers. It was difficult to salvage the limb but we did it. Such polytrauma patients need timely care at a tertiary care center to help gain complete recovery. Unfortunately, such patients get delayed in their commute to reach and may end up losing the chance to salvage a viable limb. Many times such patients may have to undergo amputations. These could be very detrimental and would change the entire aspect of life. Also, timely intervention with multi- multi-disciplinary approach gives a better fighting chance to save a life in various aspects. He could walk independently before leaving the hospital.
“My world came crashing down after the accident and I thought I would never be able to stand on my feet again. But, I am a policeman, I am a fighter, and I am determined to resume my duty as soon as possible. I was hopeful that I will be able to overcome this trauma. I wanted to become independent just like before. I thank the team of doctors at Wockhardt Hospitals, Mira Road for giving me a new lease on life. Now, I have started going on duty again and doing what I like the most. I urge each and everyone to take utmost precautions while traveling by road,” concluded the policeman
Facebook
Twitter
Pinterest
LinkedIn